Just for fun, as it’s the Easter weekend, here are some egg-themed comic moments!

One of Stan’s solo films for G.M. Anderson, this is one of his better comedies from this period. There’s plenty of lively lumberyard slapstick that Laurel later reworked in his own solo ‘THE NOON WHISTLE’ as well as the great L & H comedies ‘THE FINISHING TOUCH’ and ‘BUSY BODIES’. This is more thoughtfully put together than many of his early comedies, with the opening scenes reliant on cross-cutting to compare Stan’s lowly life with that of the villain, Colin Kenny. (Incidentally, Kenny’s butler is believed to be Stan’s younger brother, Ted).

Stan’s performance is more subtle here, too, than in many of his solo films. He does, however, still have the occasional tendency to break the fourth wall and mug unnecessarily to the audience, a visual equivalent of the music hall comic’s asides to the audiences that just doesn’t translate. On the whole, though, this is a pretty good effort.

The lysergic dream visions of Charley Bowers are some of the most creative films in all of silent comedy. Mixing live action and animation, he seemed to be especially fixated on eggs and the magical transformations that occur in them. You might even call him an egg-centric… (Thank you, thank you. I’ll be here all week…)

Hmm, anyway, ‘EGGED ON’, his first ‘Whirlwind Comedy’, takes this further by featuring him as an inventor working on unbreakable eggshells. The whole film doesn’t appear to be on YouTube, but here’s a clip of its most brilliant segment, in which Charley discovers transporting eggs by flivver can result in unusual side effects…

Two sound-era clips to finish with. Groucho orders dinner, with a little help from Chico and Harpo, in ‘A NIGHT AT THE OPERA’…

Network DVD’s groundbreaking ‘The British Film’ series continues to illuminate the murky waters of 30s British film comedy. The dominant Film History 101 myth of 30s cinema tells us that the only worthwhile British comedies were Will Hay, Gracie Fields and George Formby. Occasionally, Jack Hulbert or The Crazy Gang get a mention, but mostly everything else is brushed over. Actually, there are hundreds of other 30s British comedies out there, and some hidden gems among them, too.

A gamut of Stanley Lupino films have made their appearance out of the archives for the first time. To me, these are really the highlights of this DVD series. Lupino is a terrific performer, who also took a big hand in the writing of his scripts and musical numbers; indeed, the majority of his films are based on his own musical plays. Lupino’s persona is that of a little cockney playboy, often an aspiring songwriter; usually, he’s down on his uppers. He’s a small fellow, and a little peculiar looking, but he has a whole lot of nerve, and relies on this, as well as his energy, quick wit and acidic sense of humour to pull him through. A typical Lupino put-down, delivered with a sickly mock-earnest grin:

DOORMAN: Your face makes me tired.

LUPINO: And yours gives me insomnia!

MAN IN BRIGHT SUIT: Be careful! You nearly spoiled my suit!

Lupino was another member of the illustrious Lupino family. Here, he hams it up with a rather awkward interviewer, discussing his heritage and career:

Stanley was cousin to Lupino Lane, and sure enough, the two performers share a certain comic technique derived from their family training. If you’ve seen Lupino Lane’s films, then Stanley’s wide-eyed, darting glances and jerky, bird-like movements in the face of danger will be familiar. While Stanley was certainly limber enough, he didn’t take the acrobatic slant of Lane, directing ,most of his energies into musical numbers and farce comedy instead.

Typically his plays and films followed one, some or all out of the following formulae: quirky variations on farces (‘THE LOVE RACE’ ‘HONEYMOON FOR THREE’, YOU MADE ME LOVE YOU), moonstruck quests for a girl in a crowd (‘YOU MADE ME LOVE YOU’, ‘CHEER UP’, ‘FACING THE MUSIC’) or a similarly dogged mission to sell an invention, song or play (‘HAPPY’, ‘CHEER UP’ ). All feature some great musical numbers, including comic songs like ‘STEAK & KIDNEY PUDDING, I ADORE YOU’, and creative dance routines. These reach their zenith in ‘OVER SHE GOES’: a perfectly synchronised 3-man song-and-dance routine, ‘SIDE BY SIDE’, filmed with a continuous 360 degree camera pan. 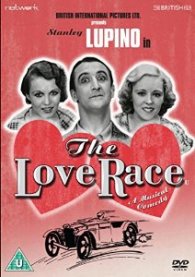 It was Lupino Lane who scaffolded Stanley’s entry into films, directing his first two efforts. ‘LOVE LIES’, his debut, remains elusive, but ‘THE LOVE RACE’ has been released in a sparkling print. It’s is a good early effort, obviously stage-based in it’s country house settings, but with a zip to it that transcends a typical 1931 stage adaptation. Based on his play, it features Stanley as Reggie Powley, best buddy to Jack Hobbs, even though their families are fierce rivals. He’s also engaged to Hobbs’ sister Ida. Unfortunately he’s had a baggage mix up and up turns Rita Payne with his case.(Keeping things further in the family, the girls Ida and Rita are named after Stanley’s daughters, by the way)

The contents of the bags get mixed, and Reggie’s fiancé arrives just in time to sees his pyjamas fall out of her bag. Hobbs gets flustered and passes her off as his sister. Confused yet? Well, ‘THE LOVE RACE’ takes delight in piling on complications. Adding to the confusion, Hobbs’ mother has remarried silly ass Ferdinand Fish (Wallace Lupino, here billed as Wallace Arthur—was he just one Lupino too many?). He arrives unbeknown to the mother, and makes himself at home in his new house. Lupino and Hobbs think he’s nuts, and humour him. There’s a terrific scene of Stanley repeatedly conning Wallace out of hisdrink by manipulating a swivelling table. Each time his lips find the glass empty, he mutters “Well, well, well, dear, dear dear…”, rising in incredulity each time. It’s a great example of music hall pantomime, executed by some of its finest exponents.

When the Furious father turns up, now Rita is passed off as Stanley’s wife! Throw in a drunken cabbie looking for his hat, and a gawky spinster determined to wed Lupino, and you have a very entertaining, if highly improbably, high speed farce. The speed becomes literal in a racing car climax which features an amusing cameo from Lane as a race spectator.

His later films streamline the farcical ingredients, to their advantage, but still provide original twists. ‘HONEYMOON FOR THREE’ sees him drunkenly entering the wrong flat and waking up, innocently, in a girls’ bed. The girl’s father happens to be meeting Lupino’s father on business; when the two men find Stanley and the girl together, they insist on their getting married and going on a honeymoon. Stanley agrees to go along with it, promising he will give her a divorce as soon as the honeymoon cruise is over. Her fiancé, furious at being spurned, tags along, threatening Lupino at every turn. Eventually, of course, the newlyweds really do fall in love, and the divorce never happens.

Stanley Lupino and Thelma Todd in ‘YOU MADE ME LOVE YOU’

One of Lupino’s most unusual films was made in 1933, and it is also one of his best. ‘YOU MADE ME LOVE YOU’ is one of a series of early 30s English films by British International Pictures featuring Hollywood stars in an attempt to bring prestige to the domestic industry. As such it features lots of resources thrown at it. There’s wonderful comedienne Thelma Todd moonlighting from appearances in Hal Roach comedies, during a promotional trip taken with Roach and Charley Chase. Rather than a jarring contrast, Todd’s Hollywood glamour is a great foil to Lupino’s English musical comedy and pantomime heritage. The film is ably directed by slapstick comedian Monty Banks, who himself makes a cameo. To top it all off, the last ingredient in this cinematic hodgepodge is a screenplay by Frank Launder, based on Shakespeare’s ‘THE TAMING OF THE SHREW’! Unlike many of the films made by comedians in unfamiliar foreign studios (Atoll K, The Invader, El Moderno Barba Azul, anyone) works out just dandy, thank you very much.Such a contrived confection really should be dreadful, but there’s so much talent in here that everything comes off beautifully. The performances are pitch-perfect by all concerned, and the script zings with one-liners and comebacks. Stanley Lupino’s usual moonstruck lover, small but determined to get his way and laugh in the face of bad luck, is made for this film; having seen Thelma, he is determined to win her over, even when he finds out she’s a holy terror. He hatches a plan to “treat her mean”, with lots of comic contrivances along the way, including cheerily putting her through an awful honeymoon, before everything turns out happily. The whole film is a barely believable piece of fluff, but it is packed with such energy, humour and movement that it carries off its unlikely ingredients with aplomb.

Similar in tone, and very nearly is good is ‘FACING THE MUSIC’, which sees Lupino again in dogged pursuit, this time to the beautiful secretary to a temperamental opera singer. Once more, it’s Lupino’s energy that really carries the film through some great visual comedy and dance routines.  Films like these prove Stanley Lupino to be one of the most under-rated English film comedians, his films glossy, well produced and action packed.  He undoubtedly offers the most rewards of any comic performer yet rehabilitated by Network’s ‘The British Film’ series. See for yourself here!