Network DVD is currently releasing a magnificent series on DVD, ‘THE BRITISH FILM’. These long-forgotten comedies, dramas and thrillers have been unseen in decades, leaving their stars little more than nebulous names in history books.  There’s a tendency to think of 30s British films as all stodgy, talk-heavy films, or ramshackle music hall vehicles. Well, ok, there are a fair few that fall into those categories, but certainly not all. The lack of availability has led to a lazy blanket assessment of what was actually a very diverse, often entertaining and creative bunch of films.

Best of all, Network is having a sale for 2 more days on their British Film series; you can get 40% off most titles at networkonair.com until the 7th.

I’ve partaken myself, and I’ll be reviewing some of these forgotten gems as I work through my glut of purchases. 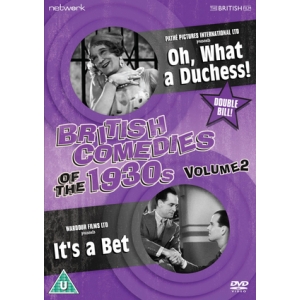 ‘OH! WHAT A DUCHESS!’ boasts an interesting pedigree. George Lacy, the star, was the most celebrated pantomime dame of the era. The film was originally trumpeted as an adaptation of Fred Karno’s famous ‘show-within-a-show’ sketch ‘Mumming Birds’, which was Charlie Chaplin’s breakthrough stage role. Enlisted to direct was silent comedian Lupino Lane, who had made his own version of ‘Mumming Birds’ as the great silent short ‘ONLY ME’.

However, little of this is left in the finished product, beyond a vague resemblance in a sequence in which Lacy accidentally wrecks a show taking place on stage. If something of a let down for the Karno enthusiast,  ‘OH! WHAT A DUCHESS!’ actually stands up pretty well on its own. Lacy is incompetent lacky to a lousy theatre troupe, but dreams of becoming an actor. The troupe are invited to dinner by a butler at one of the audiences, who really has his eye on one of the actresses. With his employers, the Duke and Duchess of Stonehenge, away, the butler declares open house, but a  visiting American film producer demands to see the house, leading to Lacy impersonating the duchess.

Some reviewers of the time, perhaps expecting something more in the Mother Goose idiom, complained that “Lacy is given not much to do”. In fact, this is a fine film, rich in the music hall tradition, and snappily directed by Lane.  The slapstick of the stage-wrecking scenes is done well, if not terribly original. Performances in the film are good, too, especially that of Lacy. He is excellent both as his bumbling, enthusiastic character, and in drag as the ‘duchess’.  It’s easy to see why his dames were considered the best; as director Lane himself observed in his book, ‘HOW TO BE A COMEDIAN’, “this type of comedy looks fairly easy, but there is more to it than you would think. […] The stance of the female species is totally different to the male”.

Lacy is a master of this. He is able to remain convincingly feminine with just the right degree of eccentricity to be funny, but not  grotesque.  As with many music-hall based films, the momentum is lost as he replicates (presumably) a stage sketch, an eccentric song and dance version of ‘The Pipes of Pan’. It’s funny stuff though,  if unnecessary to the plot, and this film as a whole is great fun. On the basis of the evidence here, it’s curious that Lacy made no more films after this one. Lane always had the ambition of making a film version of a pantomime, and he could have fitted right in.

Nevertheless, Lacy’s career can hardly be said to have fizzled out. He went on playing Mother Goose on stage for another 50 years after completing this film, making his last performance in Southsea at the age of 80. 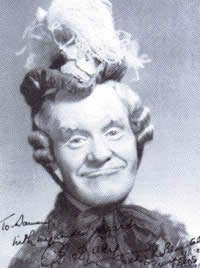 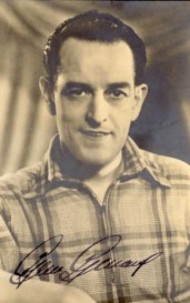 ‘IT’S A BET!’  finds itself surprisingly topical; the setup is uncannily similar to recent TV series ‘THE HUNT’. If you haven’t seen that show, it involves several member s of the public going on the lam for a month to see if they can evade capture by the police and MI5 in our world of constant surveillance. Remove the modern CCTV technology, add in dapper stage star Gene Gerrard, and you essentially have this film. Gerrard looks rather like Harold Lloyd did when he removed his glasses, and that’s actually a pretty good analogy: he’s good looking and charming, but without any particular feature to make him stand out. Our star is a journalist who bets a friend he can go into hiding for a month and not be found by anyone. Things are complicated when his car is stolen and used In a robbery, with a result that the manhunt for him becomes a national race. It’s a good story that has more excitement than the usual kind of bland light comedies made by stars like Gerrard. The story also aids the pace of the film, which moves along smoothly. It also provides opportunity for lots of nice location work, including nice scenes of St Leonard’s Pier. The finished result is a film with a sunny atmosphere and a feeling of constant motion. It lacks any standout comic set pieces, but remains engaging all the way through as an amiable time-passer.

The two films on this disc very much belie the notion that British comedies of the 1930s are all stodgy, hoary old relics. Both seem fresh and entertaining, if undeniably dated. Both come in sparkling new transfers from original elements, and are well worth taking a look at.