One of the Paramount shorts made by Dane and Arthur, 1931’s ‘A PUT-UP JOB’ is a partial remake of Keaton’s classic ‘ONE WEEK’.

Karl and George K Arthur find work as builders assembling a flatpack house for Neely Edwards and Marjorie Beebe. Of course, things don’t go to plan and, after several catastrophes, the house ends up with all the rooms assembled upside down. The topper comes when it turns out that George has accidentally nailed the side of the house to their truck. As they drive away, congratulating themselves on a job well done, they take the whole wall with them!

While inevitably nowhere near the standard of Buster’s original, this is a really fun short with some lovely sight gags and an excellent supporting cast. Karl is excellent as the gum-chewing goofy strongman, with a great line in pop-eyed double takes. He even gets to do a patented Keaton gag from the original… 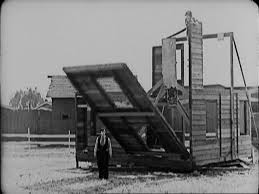 Of course, Buster had already done the definitive version of this gag in ‘STEAMBOAT BILL, JR’, but it’s still nice to see it turn up. In my last post I speculated on how a Keaton-Dane team might have worked. On the evidence of this short, very well it seems. Another lost opportunity…

While it doesn’t seem to be available on YouTube anywhere, ‘A PUT UP JOB’ has been made available on Kino’s ‘PARAMOUNT CAVALCADE OF COMEDY’ DVD. Check it out, it’s a good one and a reminder of Karl Dane’s engaging talent. 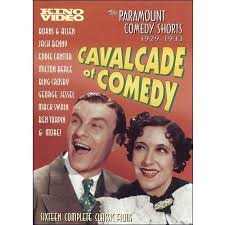