I just stumbled across some screening notes I wrote for a programme of ‘imitation Chaplin’ comedies at last year’s Silent Laughter Weekend. I’ve reproduced them here, adapted slightly to incorporate some video links. Hope you enjoy!

Charlie Chaplin’s phenomenal popularity in the mid-teens was dubbed ‘The Chaplin Craze’ or ‘Chaplinitis’ by the press. His rise to fame had been made possible by a huge boom in mass-amusement culture, beginning at the end of the Victorian era. Additionally, the new technology of silent cinema enabled a universal recognition for performers beyond previously insurmountable language and travel barriers. With his instantly recognisable image, Chaplin arrived on screen just in time to act as a kind of divining rod for these forces.

Chaplin’s was celebrity on a scale never seen before. He was as astonished as anyone, later remarking, “I knew I was famous but didn’t know what fame meant.”

He was soon to find out. Puppets, dolls, toothbrushes, sweets… all kinds of merchandise imaginable soon bore the familiar image of the tramp. There were Charlie Chaplin songs, dances, fancy dress parties and lookalike competitions (the oft-told story of Chaplin entering one such contest and coming second is now believed to be apocryphal, however!)

Some took their impersonations a step further and turned it into their own act. Among the legions ‘doing Chaplin’ were some future stars: Bert Wheeler and Walter Forde both started on the stage in this way, for instance. Stan Laurel, previously Chaplin’s understudy in Fred Karno days, also included an ersatz Mabel Normand and Chester Conklin in his act “The Keystone Trio”. British comedian Frank Randle was chased away from Blackpool Pier after busking his act there, and his contemporary Sid Field was also a Chaplin street performer.

Within the film industry, desire for Chaplin product outstripped the speed with which the increasingly methodical comedian could turn it out. Many of his earlier films would be repackaged and reissued (Essanay studios, in particular, excelled themselves at milking leftover scraps of Chaplin footage, expanding ‘A BURLESQUE ON CARMEN’ to twice its original length, and making an entirely new film, ‘TRIPLE TROUBLE’ from scenes Chaplin had discarded). Even these efforts did not fulfil public desire, and it was inevitable that other companies would attempt to get a piece of the pie.

A series of ‘Charley’ cartoons made by Otto Messmer are an early example. These actually received a helping hand from Chaplin himself, who provided a series of portraits in various poses to assist Messmer’s drawings. The cartoonist would later incorporate a considerable Chaplin influence into his most famous character, Felix the Cat.

Cartoons were one thing, but screen imitators provided a direct threat of competition. Practically all film comedians of the late teens took some influence from Chaplin, but some did so more blatantly than others. Devoted to redefining the word ‘blatant’ was Billy West, whose deception extended to sleeping with his hair in curlers, and learning to play the violin left-handed! He also poached Chaplin’s Essanay co-star Leo White to add to the illusion in a series of films for the King Bee corporation. West’s impersonation attracted derision from some quarters at the time, and he is still often dismissed outright. However, he was a capable comedian and his Chaplin imitations provide some good laughs. He also got a big helping hand from some other comic minds; Oliver Hardy was his heavy, made up to resemble Chaplin’s ‘Goliath’, Eric Campbell. His director was also a gifted comedy craftsman: Charles Parrott, the future Charley Chase.

Billy West, with Babe Hardy on the left.

Here’s a prime example of the West-Hardy-Parrott triple-threat: ‘HIS DAY OUT’, from 1918

And here’s THE CANDY KID (1917), directed by Arvid E Gillstrom before Parrott joined the series,

Charles Parrott would later work  with another Chaplin impersonator, Harry Mann in films like ‘THE FLIRTS’ (featured on the ‘Becoming Charley Chase’ DVD set) and ‘DON’T PARK THERE’.

Billy Ritchie is one of the most interesting Chaplin lookalikes, gaining a certain notoriety for claiming that Chaplin actually copied him. Glaswegian Ritchie claimed that he had been wearing a similar costume for years on stage before Chaplin used it. There is probably some legitimacy to his claim (not to mention a strong possibility that Chaplin & Ritchie were actually related) but truthfully the bowler, cane and moustache were all fairly standard parts of the music hall comic’s attire.

It’s clear that Ritchie’s take on the tramp was a very different animal. While the early Chaplin was given to bouts of violence, Ritchie can be downright hostile! His default expression is a scowl, and he’s generally given to cruder body language, sticking his rear out as he walks. Chaplin’s tramp may have been anti-authoritarian, but Ritchie was an anarchist!

To this day, he has some fierce defenders who feel he was robbed. No doubt, he hasn’t received his due as an original comedian in his own right, but he was never really going to be a timeless performer. Unlike Ritchie, Chaplin developed his character  to be not just a suit of funny clothes, but a real human. As a knockabout comedian, Ritchie could be excellent,  but he was probably never going to make ‘THE KID’. He certainly wasn’t going to while working in fast-paced, violent comedies for L-KO under the direction of Henry Lehrman.

Lehrman’s penchant for savage knockabout was to be Ritchie’s undoing – one film, POOR POLICY, saw him bizarrely savaged by ostriches, setting off a bout of ill-health ending with his death from stomach cancer in 1921. (I’ve seen this film, and the way he treats the ostriches, I’m not surprised they bit back!)

L-KO were also responsible for another Chaplin spin-off. Chai Hong, billed as “The Chinese Charlie Chaplin”, was actually Korean. While it was his Chaplin impersonation in ‘PLAYING MOVIES’ that brought him to attention, this was a one-off. His other films had him playing his own, if stereotypically ‘oriental’ character. He starred in several shorts before disappearing from the screen in the early 20s. Hong later became valet to actor Lew Cody. 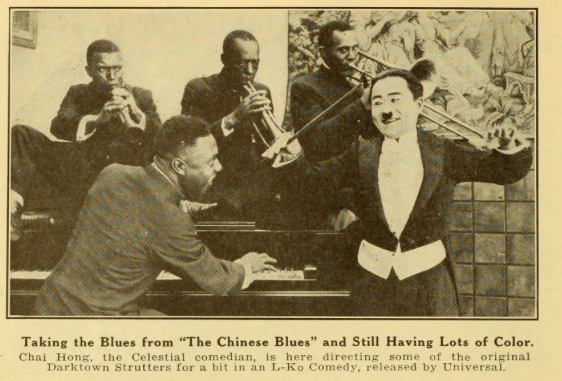 While these are examples of outright Chaplin copies, many other performers evoked Chaplin in essence. Monty Banks’ early appearances are extremely Chaplinesque, and Harold Lloyd’s ‘Lonesome Luke’ character was a self-admitted inversion of the Chaplin costume. Crucially, the really gifted comedians realised that imitation proved a blind alley and would forge their own paths into the 1920s.

Even for those not copying Chaplin’s appearance or behaviour, his genius routines and plots would be re-used by many other comics. A few examples among the multitudes: Buster Keaton’s ‘THE ELECTRIC HOUSE’ features a central escalator surely inspired by that in THE FLOORWALKER, Monty Banks revisits ‘EASY STREET’ in ‘PEACEFUL ALLEY’ and Laurel & Hardy rework ‘LAUGHING GAS’ for ‘LEAVE ‘EM LAUGHING’. While these examples all took the material to a new place, sometimes the ‘borrowing’ of ideas was downright brazen. The BFI holds a rare Educational Pictures one-reeler called  ‘CUT LOOSE’ (1924) that mimics ONE AM right down to its bizarre selection of stuffed animal props! The star is Phil Dunham, another British comedian, and allegedly a Cambridge graduate. Dunham remained busy at Educational, and in small parts elsewhere well into the sound era.

Today it’s easy to sneer at the unoriginality of the copycats in the shadows of Chaplin’s genius, but the picture was more complex than this. For struggling vaudeville and film performers, money had to take precedence over artistic integrity and a good Chaplin impersonation meant money. There were many good comedians among the impersonators, many of them still funny today. If nothing else, they provide a fascinating sidelight to Chaplin’s story, and remind us just how special the man himself was.

Speaking of which, here he is at his best!