I came across this ad while flicking through old editions of ‘The Exhibitor’s Review’, an old film trade magazine available to browse through online at The Media Digital History Library. One of the joys of digitally leafing through these is the fact that little oddities like this turn up. I’ve certainly never heard of Nicol Parre before, and no reviews seem to exist of this film, which begs the question of if it ever found a release at all.

A further search through the archives revealed only one more mention of Nicol Parre, not as star, but as producer for the ‘N.P. Film Company’ in another prominent ad in ‘The Exhibitor’s Review’:

However, if we look a bit closer, I’d say the star they’re now promoting, ‘Dom Ferre’, is actually the same guy. Probably a classic example of trying to make a one-man operation seem bigger than it actually is. There’s a hint of desperation, too, in that blurb: “open to contract with any distributors”. Certainly, the surnames are suspiciously similar.

Both names sound French to me; was Nicol/Dom an ex-pat with previous experience in the French industry? Or was he of a French immigrant family in New York, trying his luck at films? We’ll probably never know, and I doubt ‘THE FARMER’ was much more interesting than its title. Still, an interesting reminder that for all the clichéd stories of extras and studio janitors crashing the movies, it could actually be pretty hard to break in as an independent film maker or comedian.

As a footnote to the story, the address above, 412 Lake Street, appears to be still standing on Google Street View. 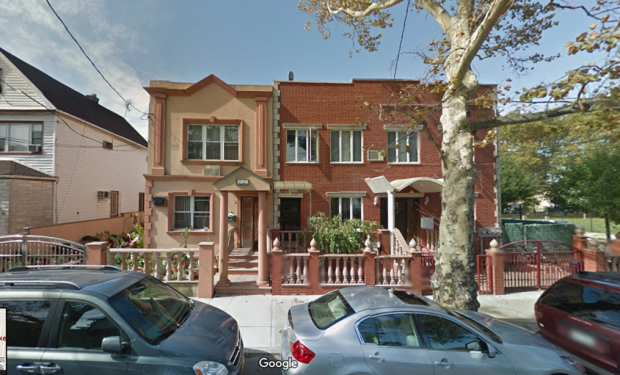 I wonder if there are any film cans buried in the backyard…?