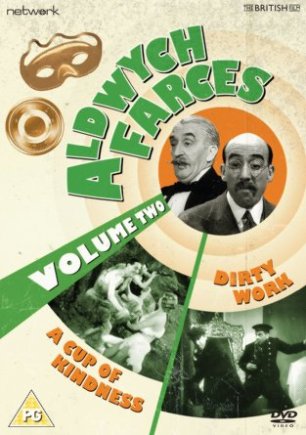 I’m working through a Christmas haul of DVDs, including several from Network DVD’s superb series, ‘The British Film’.

Long unavailable on VHS or DVD, the appearance of The Aldwych Farces is a much overdue treat. These were the first real comic successes of 30’s British cinema, based on a long-running series of comic plays written by playwright Ben Travers, and staged at the Aldwych theatre by Tom Walls. Beginning in 1930, they transferred to the screen and continued to be filmed through to the mid-30s, becoming a much-loved series. Most of the films nucleated around three comic actors. Tom Walls usually played a devious reprobate, well-to-do but sly and planning some kind of scheme. Ideal foils were provided by monocled silly-ass Ralph Lynn (pronounced Rafe Lynn), and bald, timid, bird-like Robertson Hare, who inevitably found himself mixed up in the middle of things, wailing “Oh Calamity!” In addition, many other regulars added to the fun: French Yvonne Arnaud, old harridan Mary Brough, or the superb, dithering Claude Hulbert. 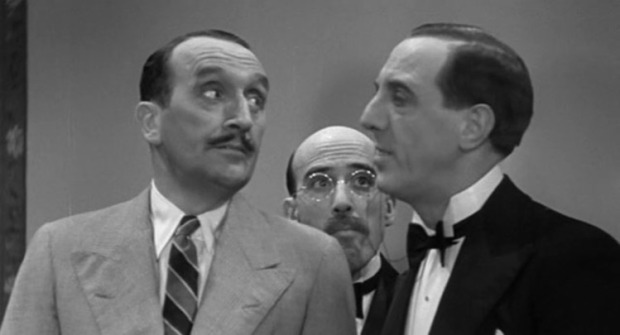 The core of the farces: Tom Walls, Robertson Hare and Ralph Lynn.

Unlike some of the surprisingly dynamic comedies in the British Film series, the Aldwych Farces wear their heart on their sleeve as stage adaptations. Tom Walls directed the films, and has been accused of directing the actors in a stage play and then pointing the camera at them. Some of the films certainly do suffer from this, and there are some rather long scenes that need a bit more pep, closer to the stodgy, theatrical style we tend to associate with 30s films. However, this is certainly not true of all of them, and in a way this is part of their charm.  In any case, the Aldwych films mostly survive their limitations to remain pleasant and entertaining examples of a bygone form of entertainment. The scripts contain many funny lines, wordplay and situations, and the performers have honed wonderful timing through their years of association. Their stock company of intrinsically British types are masterfully played, and the ensemble comedy points the way to Ealing Studios’ later comedies.

Thematically, this is very much the frothy pre-war world familiar to readers of P G Wodehouse; a world of country houses, suspicious wives and relatives. There’s nothing controversial and lots that is stereotypical, but it’s all in good fun. Even better, the films come two to the volume (one later effort, ‘STORMY WEATHER’ was also released singly a few years ago). So far, they are a mixture of some better known and lesser efforts. Hopefully, the most celebrated efforts ‘THARK’ and ‘TONS OF MONEY’ will also come along on future DVDs.

Volume 1 features ‘A CUCKOO IN THE NEST’ and ‘ TURKEY TIME’. ‘CUCKOO..’ centres around Ralph Lynn accidentally being forced to spend the night at a country inn with an old flame (Yvonne Arnaud) after they both miss their train, hire a car together and become stuck in the rain. To satisfy the suspicious, god-fearing harridan of a landlady (Mary Brough) they pose as a married couple. Unfortunately, Lynn’s wife has witnessed them going off together and followed, in tow with her dreadful mother and alcoholic old fruit of a father (Tom Walls). Naturally, Yvonne’s husband also turns up on the scene, leading to lots of awkward moments for Ralph. Lynn carries much of the comedy scenes, sneaking in and out to avoid the landlady, struggling to bed down on the floor, retrieving  a dog in the rain, or rehearsing his excuses. However, it’s Tom Walls’ drunken old reprobate who provides the best laughs, forever searching for a drink or a pretty girl before being beckoned by his wife’s call. As a director, Walls lives up to his reputation, though. ‘A CUCKOO IN THE NEST’ moves with the viscosity of treacle. With a bit more pep, it could have been a classic, but just misses the mark despite some funny moments.

‘TURKEY TIME’ boasts much better direction, including the interesting idea of giving each character a little vignette to introduce themselves in the opening credit sequence. It takes place at Christmas, with Walls and Lynn joined by Robertson Hare in the main nucleus of characters. Walls is a pugnacious chap, whose fights land him in bother, especially with his fiancé when he defends the honour of a showgirl on the pier. Lynn is a jolly chap who tags along with Walls, and has fallen in love with the showgirl . Their antics to help her out constantly land henpecked Robertson Hare in trouble with his wife. This one is lots of fun.

Volume 2 contains two of the best farces. ‘A CUP OF KINDNESS’  benefits from the additional  presence of Claude Hulbert, who I always find irresistible. It’s a modern day Romeo and Juliet story in suburbia:  neighbours, the pompous Walls and uptight Hare constantly do battle, while Ralph Lynn and Dorothy Hyson are their star-crossed offspring. Lynn and Hulbert are both hopeless at holding down jobsm but get mixed up in some dodgy shares that threaten to throw the family into disgrace. Things get a bit slow toward the end, but there are many funny sequences, including a dotty fantasy sequence that sends the whole cast back to the Stone Age.

DIRTY WORK stands slightly apart from the other farces in that Tom Walls doesn’t appear , though he still directs. In his place is the superb comic character Gordon Harker, who brings his rough-edged posh cockney (“Oh yerrrrrrs”) to the table. Harker is the doorman at Cecil Parker’s jewellery store, where Ralph Lynn and Robertson Hare also work. Thieves are targeting the store; Lynn and Harker attempt to set a trap for them, roping the reluctant Hare in to pose as a burglar. Meanwhile, the thieves have plans of their own to frame the trio for the robbery…

This one starts slowly, with lots of talk-heavy scenes in the jewellery store, but gets going at a good clip once the plans are hatched. The comic break-in scenes are excellent and this turns into maybe the funniest of all the films on the two discs. The highlight is undoubtedly Robertson Hare’s horror at being forced to shave his moustache and try on wigs to disguise himself as the burglar!

The Aldwych Farces are undeniably dated, and sometimes just a bit too polite. But, they offer plenty of smiles and even the odd belly laugh, and point a clear way to the later character ensembles of Ealing and the Boulting Brothers. As an influential part of British comedy cinemas, they’re more than worth revisiting.