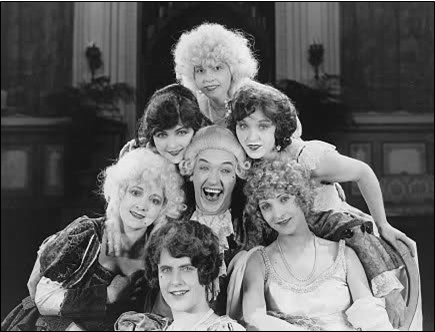 As the silent film era recedes further from living memory, it’s a constant source of amazement to me how many ‘lost’ films continue to turn up. In the last few years, we’ve witnessed the rediscovery of unknown Chaplin and Keaton films, missing films by Harold Lloyd, Harry Langdon and Charley Bowers, and the prized second reel of Laurel & Hardy’s ‘THE BATTLE OF THE CENTURY’. Truly, it’s a good time to be a silent comedy fan.

The latest discovery seems to be one of the most interesting of Stan Laurel’s solo films. 1924’s ‘MONSIEUR DON’T CARE’ was one of his independent series of comedy shorts for producer Joe Rock. It was, until now, the only one of the 12 comedies not known to exist in any form. However, in November last year, a restored 7 minute fragment found in Italy was revealed to the world again at a screening at MoMA in New York. It seems to have received little fanfare – I can’t find any reviews or comments on the screening as of yet. Nevertheless, for Stan fans, this is an exciting discovery.

Before teaming with Oliver Hardy, Laurel’s niche was parodying popular film hits of the day. ‘BLOOD AND SAND’ becomes ‘MUD AND SAND’, ‘UNDER TWO FLAGS’ becomes ‘UNDER TWO JAGS’, ‘DR JEKYLL & MR HYDE’ becomes ‘DR PYCKLE & MR PRYDE’, and so on. These are the films that first made him stand out from the masses of baggy pants film comedians, and so form a crucial part of his development as a comic. Many of them are also great, fun comedies in their own right, prescient of the Monty Python style of robust burlesque. Since Stan’s great Robin Hood parody ‘When Knights Were Cold’ turned up (or some of it, anyway), ‘MONSIEUR..’ has been just about the only one of Stan’s parody films not around in any form. Even more interestingly, it revisits Stan’s parody of Rudolph Valentino in his earlier classic ‘Mud and Sand’. Stan’s version of the great lover is given the glorious appellation of ‘Rhubarb Vaselino’, and presents lots of opportunity for the silly parody that the British sense of humour does so well.

Here, Stan turns his sights on another Valentino film, ‘MONSIEUR BEAUCAIRE’, in which he portrayed a favourite courtier of Louis XIV, forced to flee to England and pose as a barber. As a vehicle for Valentino, it was perfect, allowing for lavish costumes, swashbuckling duels and romance. Stan’s version apparently followed the original story fairly closely, but obviously put a comic twist on the scenes.

As with ‘MUD AND SAND’, much of the comedy no doubt came from Stan’s straight-faced appearance in the ridiculously lavish costumes and his comic variations on it; one frame grab from the discovered footage (below) shows him matching a ridiculous wig with a  20s vamp’s dress!

On its original release, the Kinematograph Weekly sniffily griped that there was an excess of slapstick in the film, surely missing the point that its contrast with the high society and great romantic dignity of the Valentino original was a source for comedy. Anyway, few could do slapstick like Stan Laurel.  The other Rock films are generally all very good, and start to show signs of Stan’s talent maturing, so I’m certainly hopeful for this one. The most similar film from the series to ‘MONSIEUR…’ is ‘DR PYCKLE & MR PRYDE, which is the best of all his parodies, perhaps even his best solo film. With a little luck, this film matches up to its high standard. 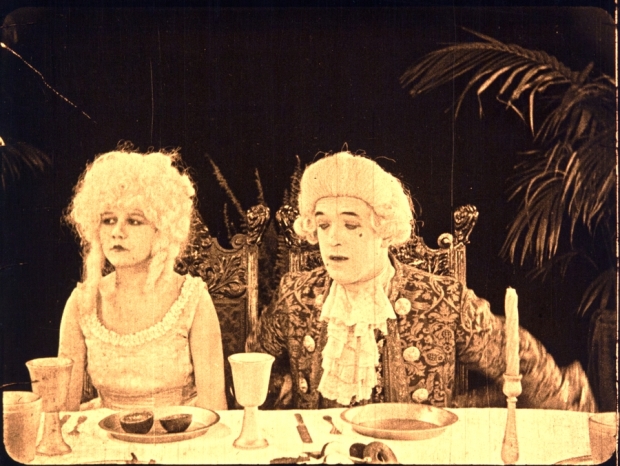 Hopefully, we’ll all get a chance to judge ‘MONSIEUR DON’T CARE’, even in it’s fragmentary form, soon, with more screenings or a DVD release. Come to think of it, it’d be a nice extra on a DVD of ‘THE BATTLE OF THE CENTURY’!

In the meantime, there’s more on the original discovery, with some frame grabs, and details of an Oliver Hardy discovery, ‘MAIDS & MUSLIN’ here. Be warned, you need to be fluent in Italian!!