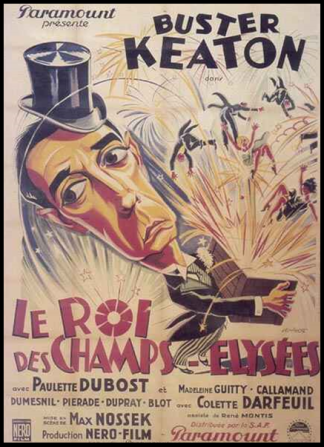 After falling from the heights of making prestigious features at MGM to taking whatever low-budget work he could get in the mid 30s, not to mention going through a rough patch in his personal life, it’s perhaps not surprising that Buster had a fairly low opinion of the work he was doing at this point. For all that, his first films after leaving in MGM, a series of two-reelers for Educational Pictures, have some fine moments amongst them. Clearly, this was a great demotion for him though,  and he jumped at the chance to regain his slipping stardom when the offer came for him to appear in a feature length film. The only catch was that he had to go to France to do so; Buster was still revered in Europe at a time when America had put him on the scrap heap. Happily, this meant he was pretty much guaranteed a sympathetic ear to his ideas.

So, in the early summer of 1934, with two Educational shorts under his belt (‘THE GOLD GHOST’ & ‘ALLEZ OOP’) Buster and his then-wife, Mae, left for France. Travel expenses weren’t included in the contract, so they travelled by freighter to save money.

As might be inferred from this, the budget of the film was not bottomless; while certainly much more generous than the Educational films, there were financial troubles from the start. The production company, Margot films, became unable to complete the production due to financial difficulties, and proceedings were picked up by producer Seymour Nebenzal. Nebenzal ran Nero Film, a Berlin-based company whose top successes had been director Fritz Lang’s ‘DR MABUSE’ series. As the Nazis’ stranglehold began to tighten on Germany, Nebenzal, Lang and the rest of the company had relocated to Paris.

The change in production was probably a good thing; while the budget was still relatively small, Nebenzal was an experienced man and used to juggling costs to sensitively fit the budget to the film ; The shooting schedule was a fairly hasty 12 weeks, and the film isn’t as elaborate as the best of the Keaton silents, but in other areas there was no skimping; there’s a full orchestral score, some lavish sets and plenty of location shooting. 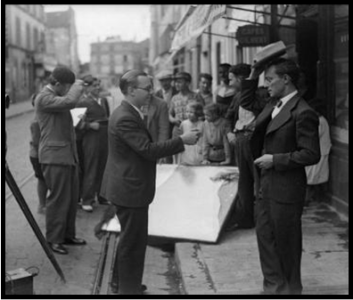 Shooting the suicide scenes on location

Buster with the film crew

The plot of the film is strong and fairly elaborate. Buster Garnier works as a publicist for an ailing company, but dreams of becoming a great actor. His job is to hand out ‘bank note’ flyers while pretending to be a millionaire; meanwhile, the company has just received 5,000 francs in cash to solve its financial worries;. Of course, there’s a mix-up, and Buster ends up giving out the real banknotes to all of Paris, including a pretty young waitress (Paulette Dubost) who he falls in love with. Fired from his job, he contemplates suicide, but his mother (Madeleine Guitty) gets him a job in a theatre production, “Le Roi des Champs Elysees. It’s been fairly simple thus far, but now things start to get a bit more involved. Buster’s part in the play is an escaped convict; the same night, an American gangster, Jim Le Balafre (also played by Keaton), escapes and his gang pick up the wrong Buster and take him back to their hideout! After a variety of mix-ups, there’s a wild chase back to the theatre, where Buster arrives back on stage, captures the crooks, makes the play a roaring success, and gets the girl!

Buster on location in Paris; the Café du Trocadero is still in business today!

The film opens with scenes of Buster riding in the back of a car down the Champs-Elysees, throwing away bundles of his fake money. As Buster rides past famous landmarks like the Arc De Triomphe and L’Opera, it’s almost as if the scenes were filmed just to say “Look! We’ve really got Buster Keaton here! In Paris! Wow!”. Nevertheless, the wonderfully bright and sunny atmosphere stops the sequence becoming gimmicky and captures the feel of silent comedy nicely.

In fact, ‘LE ROI…’ is closer to the spirit of a silent comedy than perhaps any other of his sound films (far more subtly so than his later pastiches). There are lots of throwaway pantomime bits, and many of the sight gags, especially during the early scenes, are very subtle and witty. When handing out the genuine money, Buster wanders through a wedding party. One minute the groom is declaring his undying love to his homely bride; when Buster hands him the money, he runs away down the street shouting “SAVED! SAVED!”

There is barely any dialogue at all until at least 20 minutes in; Keaton’s lines were purposely reduced to bypass his need to speak French. The film has recently been subtitled, but is so primarily visual that it makes perfect sense even if you don’t speak the lingo. Of course, this fits Keaton’s own sound dictum of only using talk when necessary, and Buster is the calm at the eye of the hurricane, remaining passive as he causes havoc around him. He’s surrounded by some rather stereotypically verbose European actors, but none of them mow him down like Jimmy Durante had, and in fact it makes a rather good contrast to his stoic demeanour.

His first meeting with Paulette Dubost is entirely wordless, and yet beautifully expressive, as he becomes totally captivated with her and just looks deeply into her eyes. As he eventually leaves, he keeps popping back round the street corner to have one last look at her. It’s a bit reminiscent of Harold Lloyd’s meeting with Jobyna Ralston in ‘THE KID BROTHER’, but only Keaton could create such a convincing expression of lovelorn longing with such minimal action.

When he does speak, he’s dubbed in a rather slimy and unappealing voice. Why this was deemed necessary is puzzling; while not a great linguist, Keaton could at least get by in French, and had spoken it in phonetic versions of his MGM films. Furthermore, he obviously did speak the lines in French before he was dubbed over; his lip movements match, and in some scenes, a few utterances like “Oui” and “Moi?” remain in Keaton’s own husky voice. At the very least, they could have let him use his own voice for the American gangster character, for which his accent would have been perfectly acceptable.

No matter, most of Keaton’s performance is pantomime anyway. It should also be mentioned how well he plays his dual role; his deadpan demeanour works surprisingly effectively as a villainous trait, and he imbues each character with different traits, never leaving you in any doubt which Buster you’re watching. 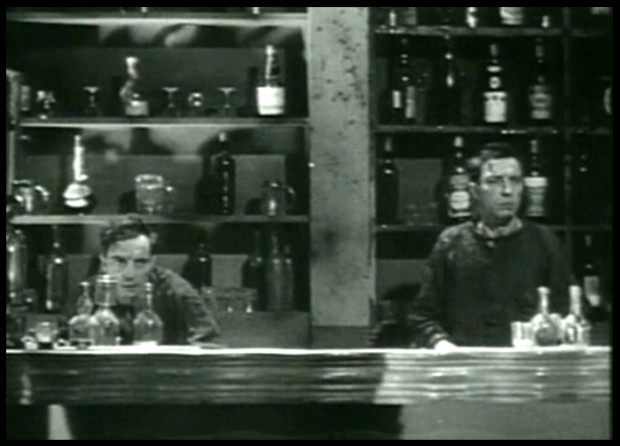 Two Busters for the price of one!

Another strong suit of the film is its wonderful music score; obviously expense was not spared on this. The result is perfect, jaunty in the comedy sections, beautifully wistful in all the romantic spots, rousing in the chase sequences, and often very carefully synchronised to the action onscreen. There’s even an overture before the film begins, and exit music! Best of all, the clunky wordless segments that characterised some of the Educational films are filled, giving a real rhythm to the film.

Many of the gag sequences return to familiar themes in ‘LE ROI…’: Buster’s unsuccessful attempts at suicide recall ‘HARD LUCK’, the gangster’s tricked up hideout ‘THE HIGH SIGN’ and his wrecking of a stage show is familiar from both ‘SPITE MARRIAGE’ and ‘SPEAK EASILY’.

Interestingly, it’s not just Buster’s own past that is revisited; the final chase sequence, with Buster trying to get the entire police force to chase him, is lifted from Harold Lloyd’s short ‘FROM HAND TO MOUTH’ (1920). The cheap budget necessitated use of stock footage from Fritz Lang’s ‘THE TESTAMENT OF DR MABUSE’ to fill out the sequence, but it’s used sensitively and effectively. The scene, and the onstage slapstick battle that follows it, is an exciting and effective climax to the film. It’s also not the only Lloyd gag to be seen in the film. As well as the previously mentioned similarity to ‘THE KID BROTHER’, there’s also one suicide gag lifted from ‘NEVER WEAKEN’(1921). It’s interesting to speculate whether this was Buster’s decision, or if the credited scenarist Arnold Lipp threw them in. If it was Buster’s call, then was it in homage to Harold, or due to a lack of inspiration on his own part?

Probably, like the Educational films, the short shooting time didn’t leave Buster with the luxury of all the time he needed to dream up the perfect gags. My main criticism of the film is that we do get rather too many gags that riff on the theme of Buster getting stuck on ladders, door frames, chandeliers, etc. Of course, he always performs them well, but such scenes of frustration are hardly the trademark of swift-paced silent Keaton, nor as inventive. 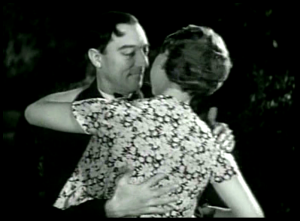 The other rather un-Keatonesque thing about the film is his smile at the film’s fadeout. Yes, you read that right; in the final scene, Buster tentatively kisses Paulette, then grabs her in his arms, purrs “Ohhh Baby!” in his dubbed French voice and breaks into a massive grin! Keaton had fought this his entire career; he told Rudi Blesh how director Chuck Reisner insisted on a smile to close ‘STEAMBOAT BILL, JR”, but how the audience hooted it off the screen at preview, and faced the same fight when making ‘THE CAMERAMAN’ at MGM. It’s puzzling that he agreed at this point; perhaps the more emotional Europeans insisted on it, substituted it for a stone-faced ending in the cutting room, or maybe Buster was just losing the will to fight.

The film did good business in France, and was exported across Europe, but was destined never to make it across the Atlantic. Unlike the market for Spanish-language films with the large Hispanic community in some areas of Los Angeles, there was not a large ex-pat community of French speakers in America. Long before the dawn of the Art-house cinema, Paramount, or anyone else just didn’t have a market for French language films. It wasn’t until the 1970s, when William K Everson turned up a 16mm print, that American audiences would get the chance to see Buster’s French almost-classic.

Most likely, this failure to reach America and and re-invigorate his stardom, was Buster’s main reason for his subsequent low opinion of the film. As you can probably tell by now, I’m really a big fan of ‘LE ROI DES CHAMPS ELYSEES’, and so, in terms of quality alone, I find his views puzzling. As with his Educational films, part of the blame probably lies with the fact that it was generally an unhappy time in his life that he later wanted to forget (of his marriage to Mae, he later said “it didn’t last very long, which is the nicest thing about it that I remember”!) .Additionally, Keaton’s purist nature must have hated both the restricted budget and, especially, the idea of using stock footage, no matter how intelligently it was done. In fact, it’s very likely that he never saw the finished film! Had he seen how well it was put together, with careful editing and an excellent score, he may have had a better opinion.

‘LE ROI DES CHAMPS ÉLYSÉES’ has always been one of the most obscure Keaton films to pick up, but it’s definitely worth the effort. For the time being, at least, it’s on YouTube, in a print apparently off Spanish TV. Even with a fraction of a budget of the MGM sound films, for me it manages to surpass them all. Take a look and enjoy this most underrated of Bk films: 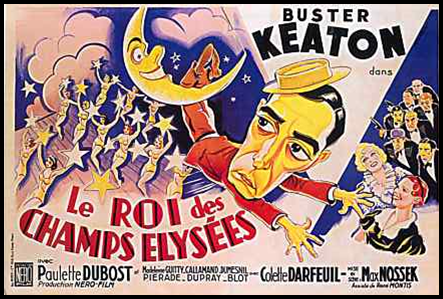