Recently, a whole load of colourised silent films have been appearing on YouTube. I won’t wade into the colourisation debate here (let’s save that for tedious flame wars on Internet forums) but it did get me thinking about genuine colour footage of silent comedians. Unsurprisingly, there’s not much about, as a) the use of colour was limited in the era and b) lots of early colour footage has decomposed. Still, there are some examples out there…

In the silent era, colour was mainly used in small doses to add some prestige to feature films. Harry Langdon filmed a fantasy sequence for LONG PANTS (now sadly lost) and Buster Keaton created a colour prologue for SEVEN CHANCES. Happily, this does exist and has been restored to current copies. It must be said that the faded 2-strip Technicolor  isn’t exactly vivid, having faded to more of a sepia effect, but it’s still nice to have it, and if you squint hard enough you can imagine Buster in living colour. 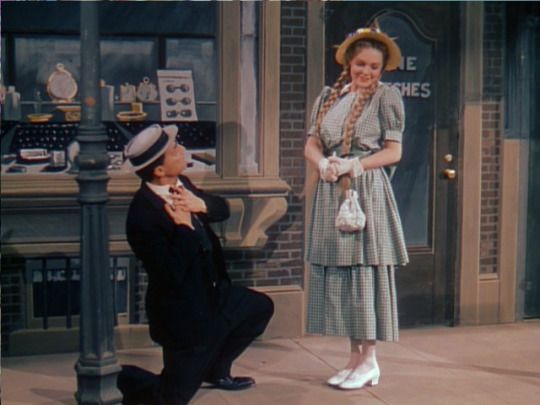 Keaton’s long career kept him working to the point where colour was much more widespread in the film and TV industry. As a result, there is lots of nice colour footage of him in his later years, but to see him looking more like the Buster we know from his classic silents, the best bet is HOLLYWOOD CAVALCADE. This 1939 feature was a vague retelling of the Mack Sennett story and Buster appears in an on-set pie throwing sequence (thus perpetrating the myth that he was another Keystone clown). It’s beautiful vivid colour, and there are even some lovely outtakes from the film showing Buster throwing pies and laughing. Sadly, neither film nor outtakes appear to be on YouTube, but there’s a brief snippet at 9:15 in this episode of the wonderful Keaton documentary A HARD ACT TO FOLLOW.

Though there is no colour footage of Chaplin from the silent era, there are a set of remarkable colour photographs taken by Charles C Zoller in 1918. These show Chaplin on the steps of his new studio and on the set of A DOG’S LIFE: 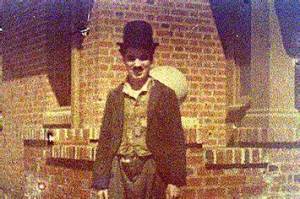 Similar in spirit are these shots of Laurel & Hardy horsing around on the Hal Roach lot in 1938: 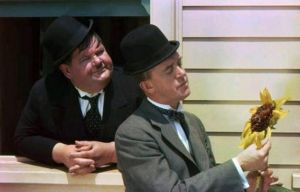 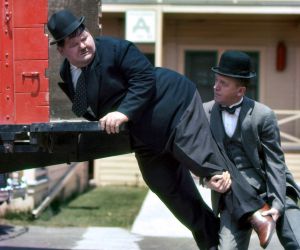 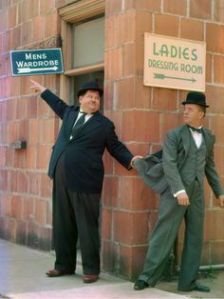 The most famous Laurel & Hardy colour footage is the 1940s public information short THE TREE IN A TEST TUBE, which features some mute film of them clowning around with wood products. Their first colour film was actually made over a decade earlier; THE ROGUE SONG was an MGM musical starring Lawrence Tibbett, with the boys added for some comic relief.  Alas, this is another early colour film that has decomposed, but a small fragment of the boys’ footage does remain. Murphy’s law of course dictates that the existing scene takes place almost in a dark cave so there’s not much colour to be had! Here’s the clip, which ends with that famous stage direction, “exit, pursued by bear!”